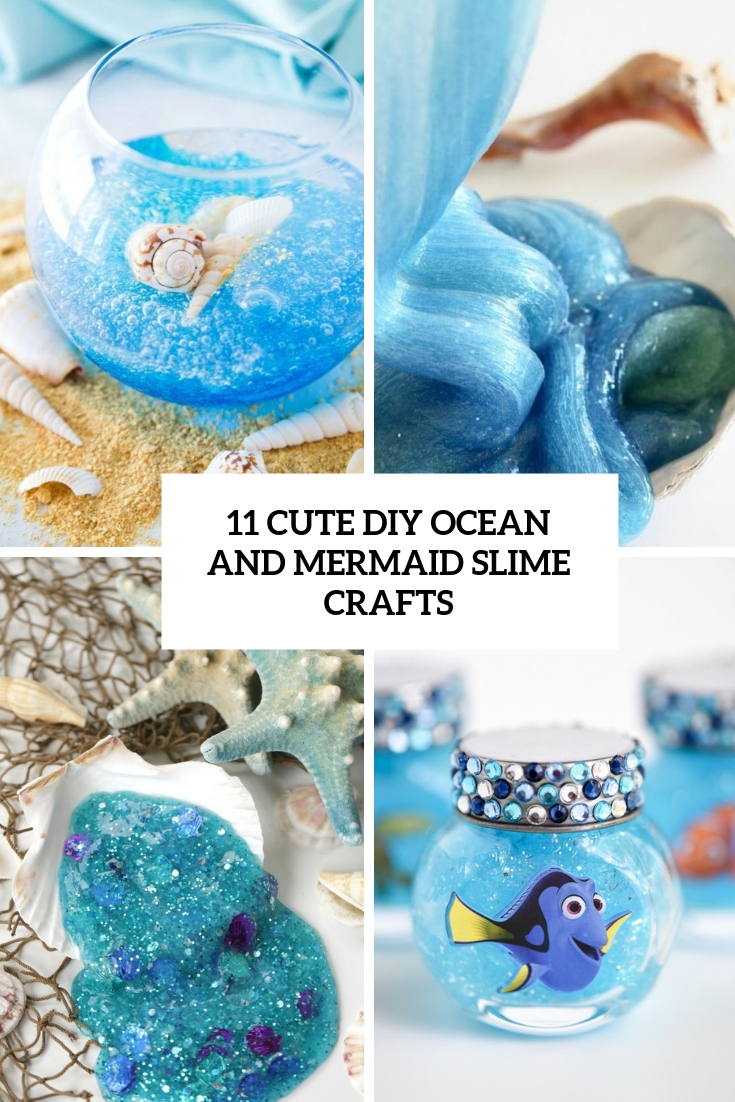 Ocean, seas and all kind of sea creatures often inspire and remind of beach holidays. Why not make a gorgeous toy for sensory play with this theme in mind? Today we are sharing some cool tutorials for kids’ slime – ocean, sea, mermaid, with fish and other stuff. Get inspired to make some for your kids!

Swirling ocean waves of color! Make ocean slime for an awesome under the sea theme to remind your kids of summer! Use any of basic slimes including saline solution slime recipe, borax slime recipe, and liquid starch slime recipe to make this ocean theme slime recipe the kids will love to play with! Making slime with our homemade slime recipes is an amazing way to connect with kids. Grab sea shells, plastic ocean or sea creatures, and shells to mix into and play with your ocean slime. Kids love to hunt for fun little items in the slime and it’s terrific fine motor practice too. 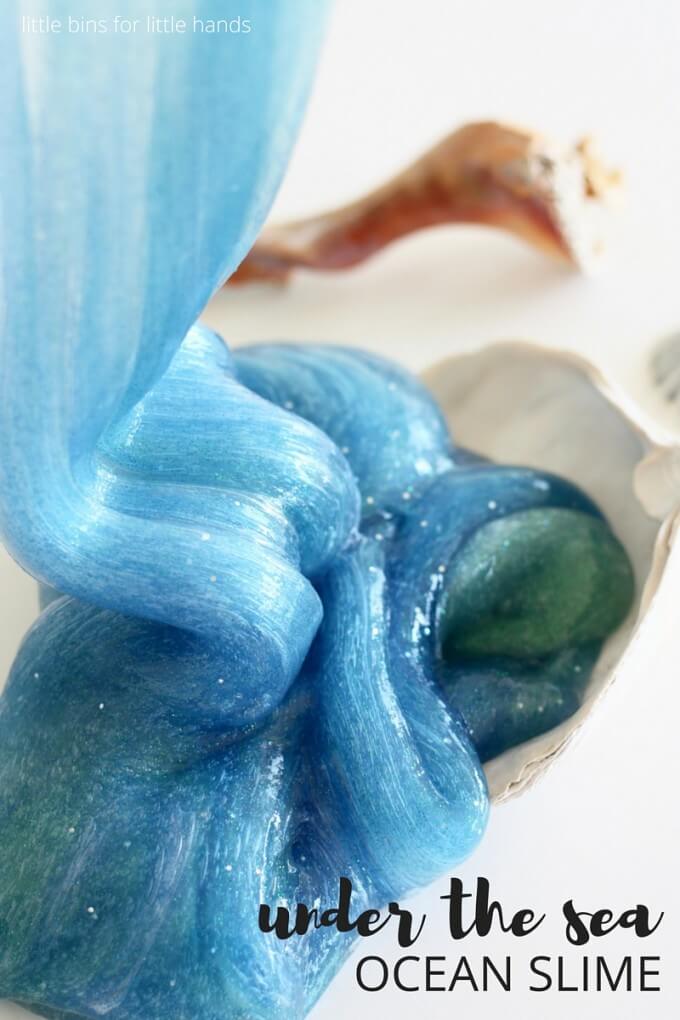 DIY under the sea slime recipe (via littlebinsforlittlehands.com)

If you have a love for everything under the sea, you must create a fun ocean slime recipe activity with the kids. Whether your little mermaid loves playing with homemade slime or you are still finding Nemo, this is the perfect summer science play for your kids. I totally love the sparkly look of this slime – it really reminds of the ocean! Such slime will keep your children busy for hours even when they can’t go to the beach, they will play with sea slime and creatures in it. 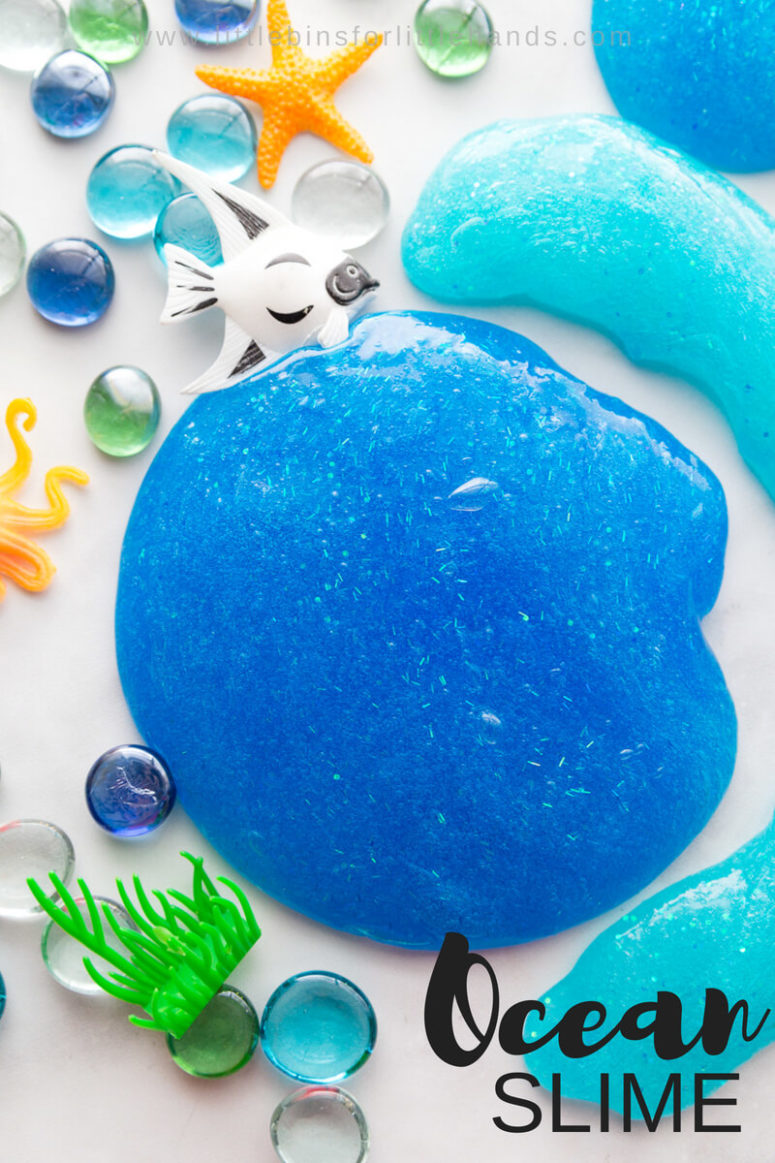 DIy ocean slime with a touch of glitter (via littlebinsforlittlehands.com)

Whether you are looking for a fun activity, an amazing centerpiece for an ocean theme party, a slime party favor or a super cool slime gift idea this Ocean Slime is perfect! You will use an incredible clear slime recipe and turn it into your very own ocean in a bottle experience. Your children will love playing with this ocean slime, and we’re sure it will become one of their favorite slime recipes. This homemade slime recipe makes the most amazing slime. It won’t stick to your hands, and you can pull it, cut it, squish it, flatten it, poke it, and have hours of fun playing with it. It’s awesome! 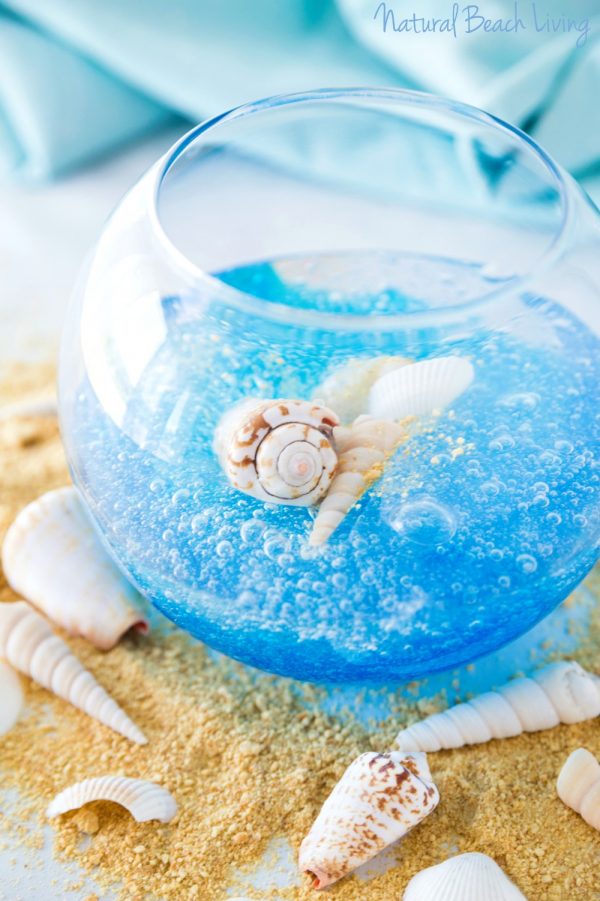 DIY ocean slime with seashells and clear touches (via www.naturalbeachliving.com)

Ever dream of being a mermaid? This is about as close as we will come no matter how much we love the ocean! Learn how to make mermaid slime perfect for an under the sea or ocean theme. This slime recipe is sure to delight the kiddos and making slime is also cool science. This slime has the beautiful glossy colors of the ocean with hints of purple and sparkle for the mermaid lover too. You can add seas glass, shells, colored or clear gems, and anything else to complete your under the sea theme. 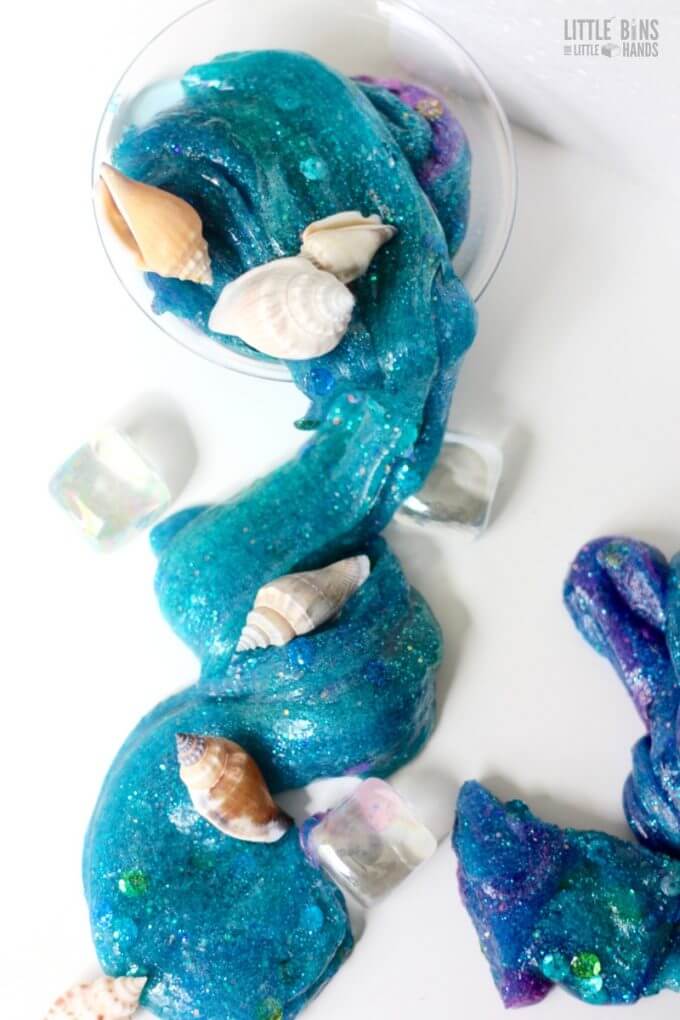 DIY under the sea mermaid slime with sequins (via littlebinsforlittlehands.com)

DIY glitter ocean slime jars is an aquarium inspired craft is a great summer boredom buster idea for kids! This easy slime recipe will show you how to make glitter slime with ocean toys to store in plastic containers. Great for saving as a summer activity or party favor for an Under the Sea party! To make the ocean slime jars to resemble an aquarium add toys in between layers of slime. You’ll want the toys to peek through the front of the jar. 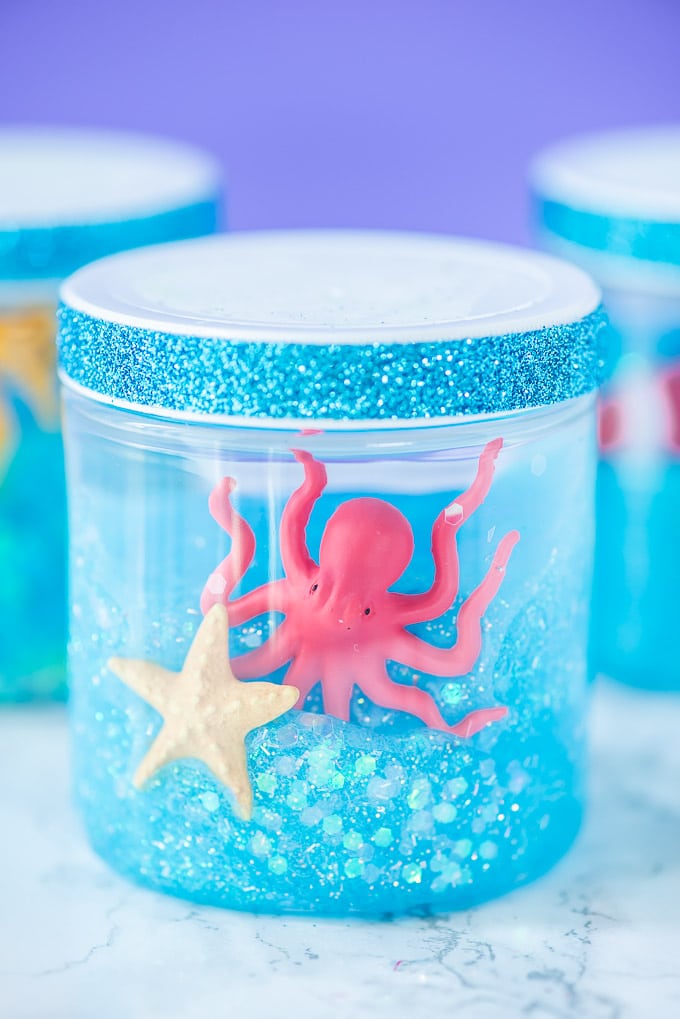 Celebrate the upcoming Finding Dory movie release with this easy glitter slime recipe. These small fish bowl jars make a great Finding Dory party favor or summer boredom-buster idea for kids! Buy some proper figurines to show them off in the jars, and the children will be happy. 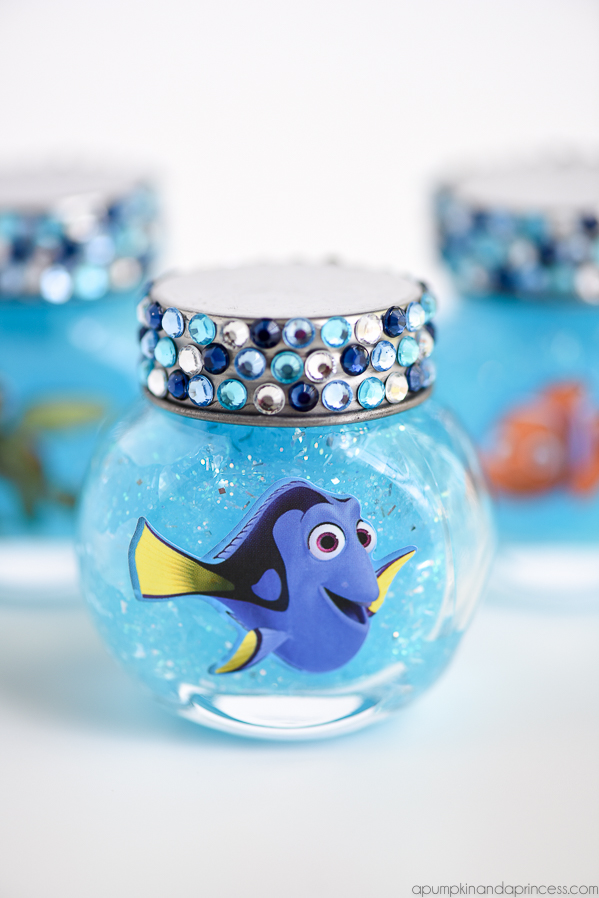 Borax-free sparkly mermaid slime is an easy kids activity perfect for your mermaid party! This glittery teal slime is going to be a huge hit with all the kids, not only the little girls. This would be the perfect activity to do with the kids at a mermaid slumber party or mermaid birthday party. How cute would that be? You could put a little bit of mermaid slime in a small container for each child so that they can take some home with them as their party favor. 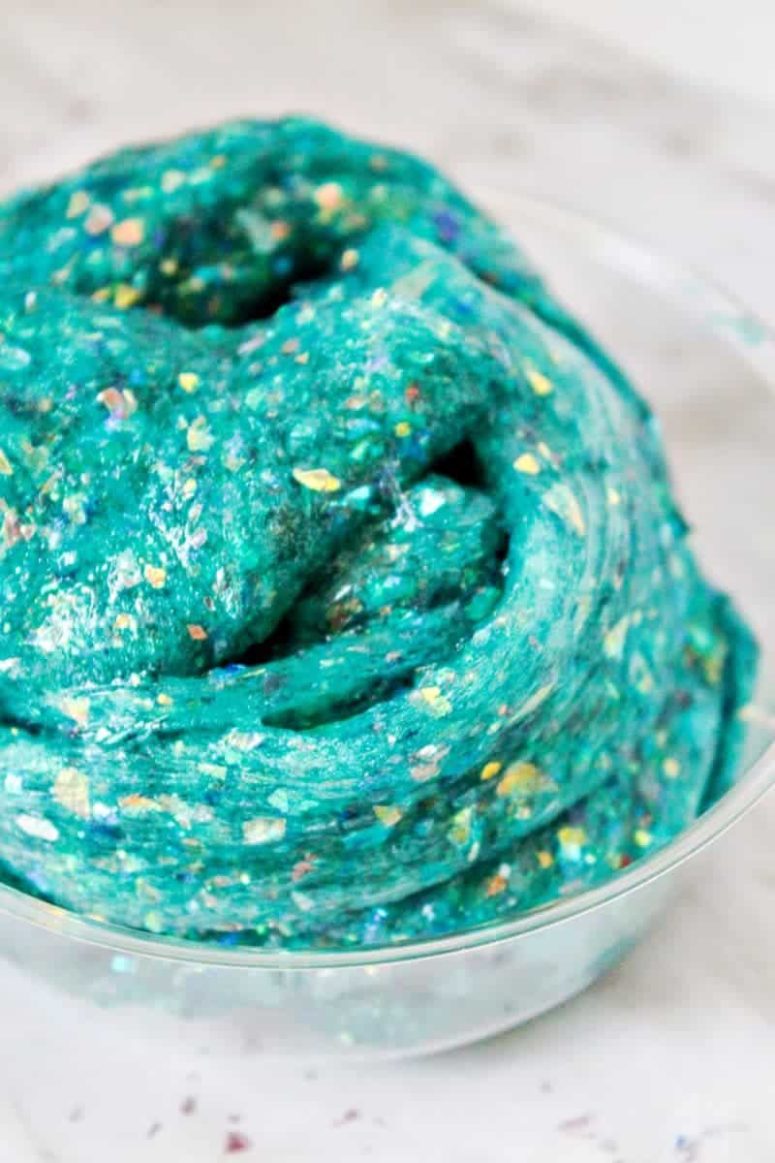 This ocean slime recipe, which is the perfect shark kids’ activity, is made with a saline solution which makes it a great alternative to borax and produces a great result. Add in your plastic ocean animals right into the slime mixture of add to the top and mix in. Making a safe slime recipe that is an alternative to a borax slime recipe is easy and affordable. Plus, you get great results every time! 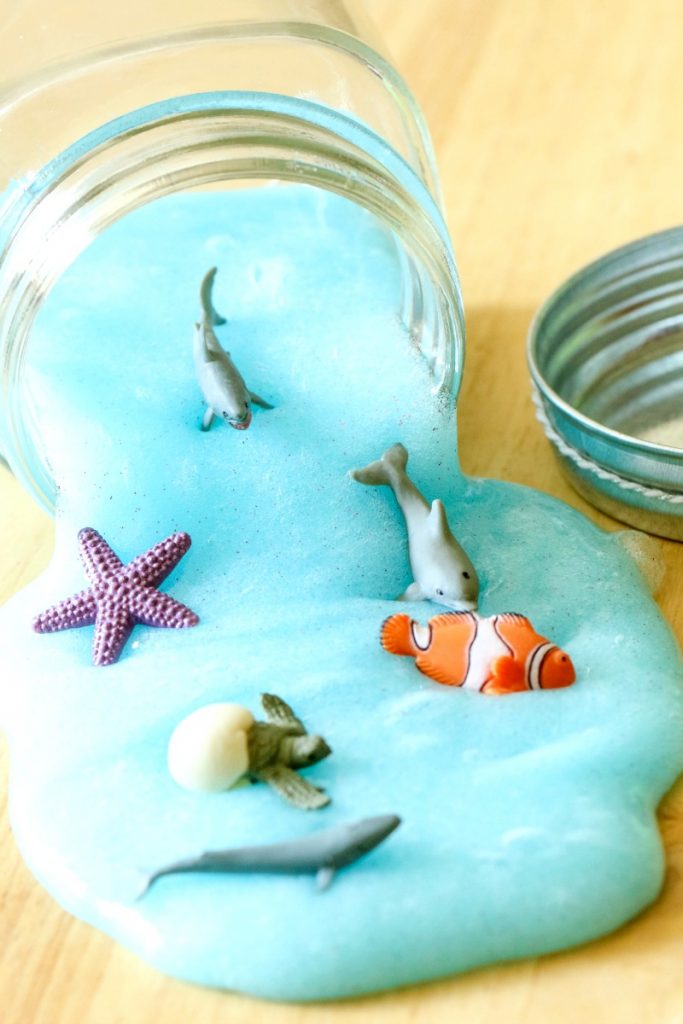 This blue and glittery, borax-free, under the sea ocean slime is a fun DIY sensory activity perfect for the summer months and not only. This ocean slime activity is great to keep the children entertained while stuck inside on a rainy day. Or, maybe you are looking for a fish-themed craft or ocean-themed kids activity. Either way, you will love this DIY ocean slime recipe. It comes out nice and thick, and holds small plastic fish in it well. The little ones will have a blast playing with this textured slime, and trying to pull the fishies out. 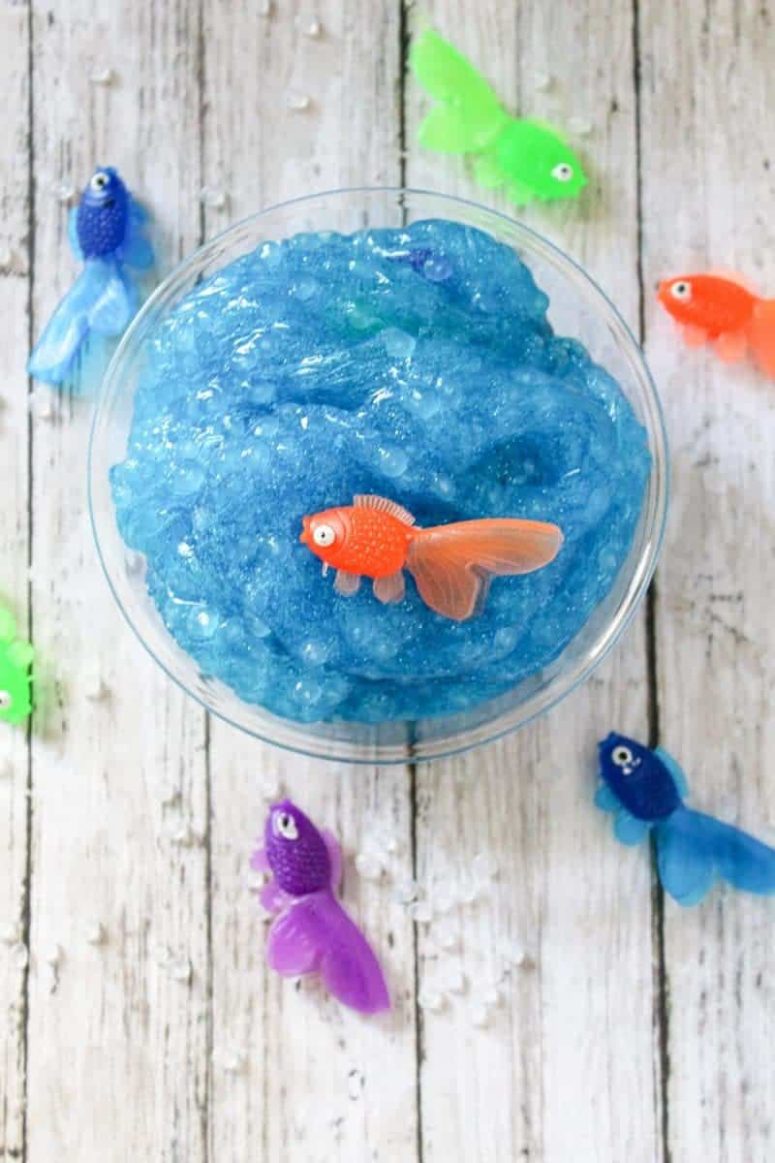 Slime is pleasantly cool to the touch and is wondrous and exciting, without being too gross or making an actual mess. A good slime should not be sticky, but rather thick, stretchy, and oozy. This mermaid slime is right like that and your kids will totally love the bold teal color of the slime and mermaid glitter – all those little shells and seahorses. Get inspired! 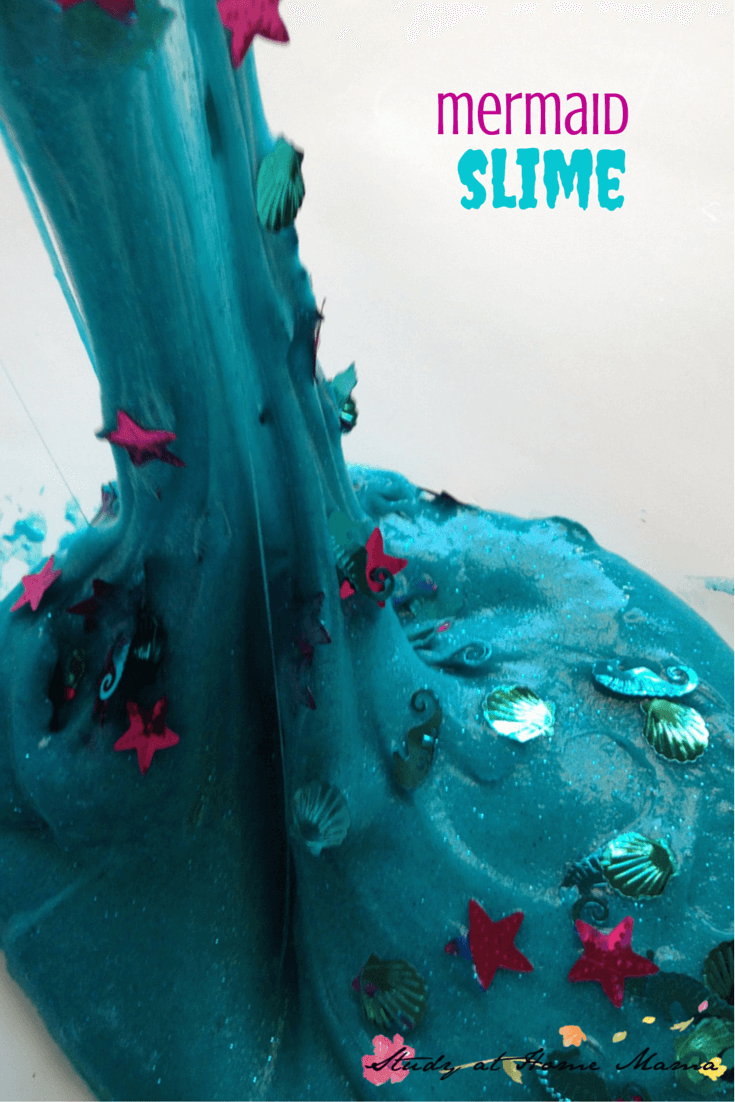 I bet Ariel will love to add this Little Mermaid Slime to her collection: this fun Disney craft will keep the kids busy for hours. The beautiful teal color combined with the glitter resembles the scales of Ariel’s fin. You can add some food coloring, glitter, and sparkle too for some extra pizzaz! If they are older they can probably make it themselves. 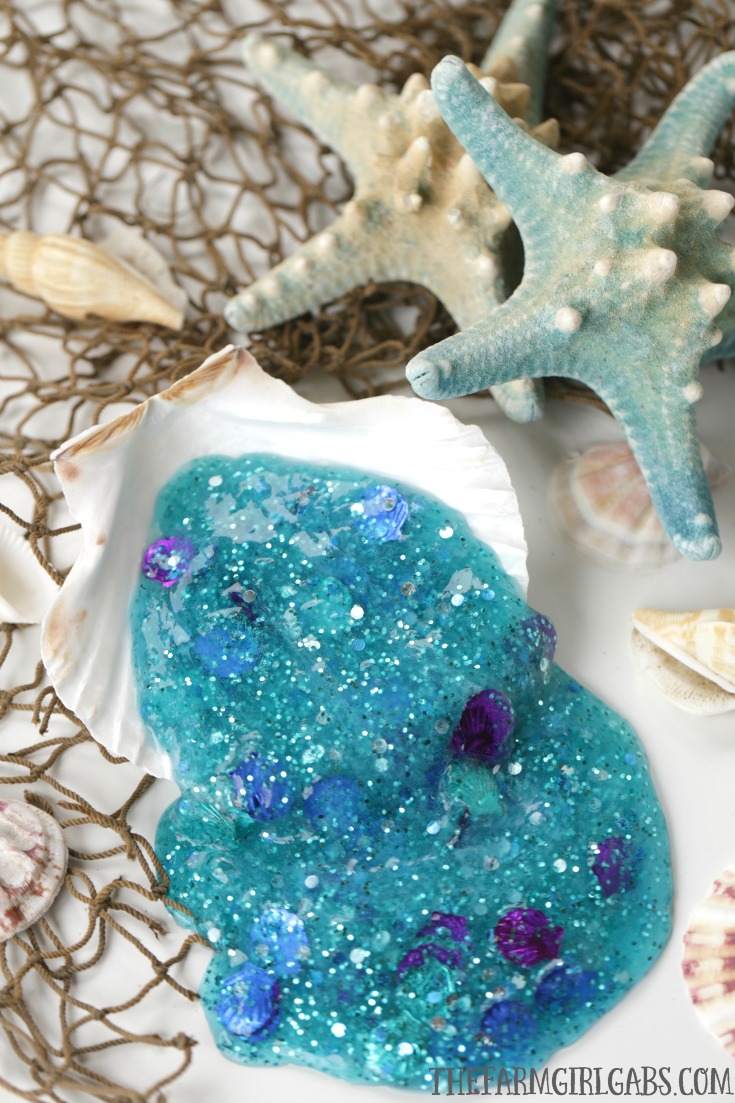